Menu
Overview
Contact Information
Upcoming Events
Photo Gallery
Overview
Originally known as Choir Number Two, the choir was formed in November of 1944, under the leadership of the late Reverend J.S. Roddy in Reynoldstown.  The original seven (7) members of the choir were:
Mrs. Ora L. Holmes                                 Mrs. Lucille Lowe
Mrs. Nettie Tatum                                    Mrs. Emma Whitehead
Mrs. Hattie Kelly                                      Mrs. Louise Maddox
Mrs. Helen Trimble
Choir #2 (W. N. Griffin Jr. Gospel Choir), received its name because it was designated to serve on the Second Sunday in the month. This choir was not only a mighty singing unit but has always been involved in the outreach programs for the church in areas of missions, health and education. Singing primarily Traditional Gospel Music, this choir has ministered all over the United States presenting yearly concerts in Baltimore, Cleveland, Ohio, Kentucky and Pensacola Florida. This choir also served as a Choir in The production of Black Nativity.
In 1987, Choir #2 produced a recording entitled “Consecration” under the direction of Ms. Joann Price and Mr. Ronald Stevens.  The choir received national recognition for their arrangement of the song “It Is Well” which the choir still keeps in its repertoire. The choir performed its first concert at SPC under the direction of Charles Westmoreland in 1995.
In 2001, The choir’s name was changed to honor one of its faithful soloist and members Mr. W.N. Griffin, Jr. . It has since grown to approximately 120 members, and currently is one of the largest choirs of Saint Philip AME Church.
The W.N. Griffin Jr. Gospel Choir rehearses on Thursdays at 7:00pm and ministers on the Second Sunday.
Contact Information 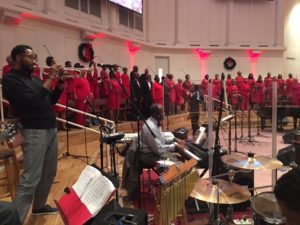