Menu
Overview
Contact Information
Upcoming Events
Photo Gallery
Overview
The Mighty Male Chorus was organized in May, 1979 through the efforts of the late Mr. Grady Patillo. Mr. Patillo served as president for three years. The Male Chorus sings quartet and traditional gospel music with its musicians Michael Gordon and Ronald Stevens.  Williams Byers, Lambert Reed, Wayne Thompson, and Carton Allen have served as the choirs Presidents over the years.
The Mighty Male Chorus has been featured across the state in several Men’s Concerts for the AME Church. Travelling yearly, to Moultrie Georgia to present and Annual Men’s Day Concert.  The Choir was the lead choir for the East Atlanta Men’s Mass Choir which was a concert featuring Men’s Choir of the East District of the Atlanta North Georgia Conference.
The Mighty Male Chorus has a heart for men serving the Lord in song but also in service.  The Male Chorus brings canned goods each fourth Sunday to stock our Food Pantry. The Male Chorus is known for showing up at the homes of members who are ill and experiencing bereavement in large numbers to pray and sing and encourage. What A Blessing!
The Mighty Male Chorus rehearses on Mondays at 7:30pm and ministers on the fourth Sundays at 11:00am.
Contact Information 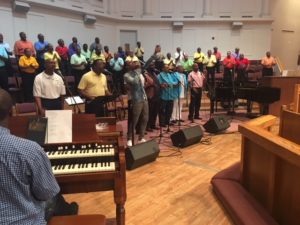